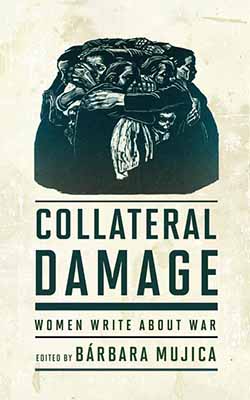 From Homer to Tim O’Brien, war literature remains largely the domain of male writers, and traditional narratives imply that the burdens of war are carried by men. But women and children disproportionately suffer the consequences of conflict: famine, disease, sexual abuse, and emotional trauma caused by loss of loved ones, property, and means of subsistence.
Collateral Damage tells the stories of those who struggle on the margins of armed conflict or who attempt to rebuild their lives after a war. Bringing together the writings of female authors from across the world, this collection animates the wartime experiences of women as military mothers, combatants, supporters, war resisters, and victims. Their stories stretch from Rwanda to El Salvador, Romania to Sri Lanka, Chile to Iraq. Spanning fiction, poetry, drama, essay, memoir, and reportage, the selections are contextualized by brief author commentaries.
The first collection to embrace so wide a range of contemporary authors from such diverse backgrounds, Collateral Damage seeks to validate and shine a light on the experiences of women by revealing the consequences of war endured by millions whose voices are rarely heard.
University of Virginia Press

“A powerful and beautiful book sharing thoughtful considerations of war from gifted authors across the globe.”

Michèle Sarde’s selection is an excerpt from Revenir du silence, a fictionalized biography of her mother, Jenny. Sarde recounts her family’s experiences during the German occupation of France, starting with the arrest of Jenny’s brother Marcel —a Jew and a resister— and ending with the liberation. [...] Sarde captures magnificently the terror that she, as a young child, felt at the approach of German soldiers. The memory is so vivid that “I could tell you the color of the sky, the summery light of a fine morning, the dazzling hues of my wildflowers and the sound, at first muffled, then louder and louder, of fourteen jackboots hammering the sloping road to Corrençon, awakening a terror that has haunted my nightmares ever since.” The young Sarde embodies the very concept of collateral damage. Although she survived and went on to achieve success, the trauma of war continues to haunt her.

My First Childhood Memories
In a flash, I dropped my bouquet and rushed to the stairs in Fleur des Alpes. I raced up them two at a time, as fast as my little legs could mount the steps, which seemed so high, barely stopping to pick myself up before racing up to the second floor. I had to pause a moment on the first-floor landing. The ogres were on my heels. Their footsteps were drawing near. I grabbed the handle of the door on the right to catch my breath. I held on with all my strength, thinking they couldn’t snatch me away from behind because I was holding on so tightly—me, a little girl not yet five, against these Nazi giants.

The Executed of the Cours Berriat
“Madame, your son is not eighteen years old. He’s twenty. He is not a student. He is a dangerous terrorist whose main concern is to evade compulsory labor in Germany. We’re going to kill all terrorists. The first thing they deserve is a bullet in the head.”
The two women had gone into the lobby of the Hotel Splendid. It was teatime. All was quiet in the Kommandantur. Officers were sitting at round tables, drinking fruit juice or beer and eating biscuits. The women were greeted cordially, almost. They were ushered to a table. Major Schultz joined them immediately and uttered these brutal words politely, with the utmost refinement.
Marie blanched. She didn’t need to muster her faltering German. Major Schultz spoke perfect French with a faint, barely detectable accent. She responded with a gesture.
“I know, I know. You’re his mother. And the young lady with you is not a friend but his sister. I too have a mother, and a sister... You see, Madame, I’ve interrogated your son. He’s a charming fellow. A genuine musician. I talked music with him, German music, which I love above all in the world... Beethoven... Bach... Handel... Haydn... Wagner... Above all Beethoven... I must tell you, Madame, that I’m a conductor in civilian life. Yes. A conductor in Leipzig... I’ve read his letters. The ones found in his pockets when we searched him. Munch! Ansermet! The greatest musicologists! All praise him! Music! It’s greater than war, music.
War is a horrible thing. But music...”