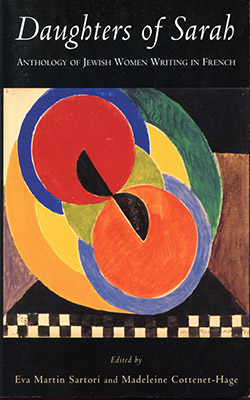 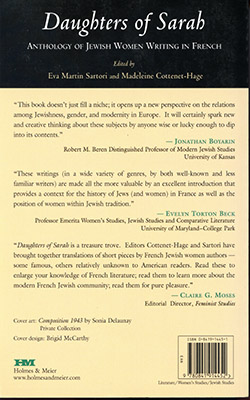 We [...] hope that this anthology will serve as a tool in considering the ways in which ethnicity and gender intersect. As Jews, these writers have been marked by their forebears’ experience in a host culture that was often ambivalent in its attitude towards the Jewish minority. As women, they struggled to find a place in a society, reluctant to grant them equal rights and equal opportunities. Because the experiences of Jewish women in France differed from those of Jewish women in other countries, we think it important to situate these writers within the social, cultural, and historical context that shaped their writing.
Introduction

The selection [...] is the chapter in which Sarah reflects on the cataclysm that discovering her Jewish identity represents in her life. Despite this secret she herself felt pressured to keep for many years, Sarah comes to see how the truth serves ultimately to reconnect her to her people’s history. [...] This is no doubt as to why Eric and Sarah’s story is so compelling. In their search to understand their personal and familial traumas, they represent a whole generation condemned to look back on what they can never recover, except perhaps in the writing that is, after all, the legacy of the myth of Eurydice.

“At first, Sophie Lambert, alias Sarah Solal, only remembered fragments of her discussion with her adoptive mother. Later, she distinguished between what the latter had revealed, on that interminable February afternoon in 1957, and what her aunt Rachel subsequently told her. In the beginning, she only retained that an eighteen-month-old baby, who was herself, had arrived in a basket on the Lamberts’ backstairs doormat, at the very apartment on rue Gustave Mahler where the revelation of her origins was made to her. [...]
“In becoming what she was, a little Israelite, as they termed it, a daughter of foreigners hunted down and exterminated in the dark, she changed camps. She became one of the damned, those about whom Clotilde de Pondavenne spoke only indirectly now. For their disappearance seemed somehow suspicious and shameful, and the word Jew crossed the lips of Madame Lambert as seldom as it did those of her daughter. [...]
“... this enterprise —the unveiling of a past that one learns it’s dead before knowing that it had ever existed at all, recovering Sarah Solal at the threshold of life—was by nature to trouble a spirit less fragile than that of Sophie Lambert’s. Without her knowing it, the metamorphosis, the destabilized teenager would inevitably meet the child from the opposite camp.
“Thus the Solal girl [Sarah] and the Hermesse boy [Eric] are in a position for the masquerade. Ahead of them, the wrong road, borrowed names, an unsound engagement that disguised a vast game of hide-and-seek with the truth—a truth in which nobody will recognize his or her own people.”
Translated by Miléna Santoro

[Brigitte Peskine] recreates the atmosphere of the Sephardic community of Istambul during the early years of the twentieth century. The narrator and protagonist of the novel, Rebecca Gatégno, is born in the city that, in 1898, is still called Constantinople, where she suffers from the triple prejudice of being “female, oriental, and Jewish.” The Ottoman Sephardim had lived four centuries with the memory of that Golden Age for Jews in Spain before the expulsion in 1492, and still spoke its language, Judeo-Spanish or Ladino.

“I was about to turn fourteen. Soon Madame Béhar, the director of the Alliance, would recommend Senyor Padre send me to Paris to pursue the program at the École Normale, and I had not yet informed my family of my plans. The moment had come to confront the paternal authority. [...] I waited to formulate my question while father sipped the coffee, dipped his spoon into the preserves, and drank the cool water.
Had I forgotten that in our home women were not made to be heard?”
Translated by Nancy Shale