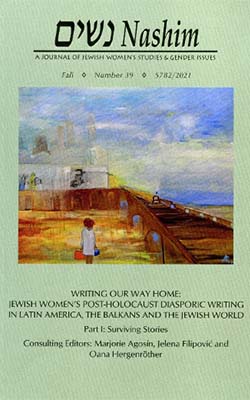 In this collection, personal accounts and scholarly essays reveal a collective spirit made up of individual narratives, the writers' personal histories reflecting a general history of Jewish writers and Jewish creativity. The anthology intends to reveal aspects of the “imagined landscape” of artists living “on the threshold of history”1, with the tides of time and space, politics and art, constantly on the offensive. How does the Jewish theme manifest in the writings of these women authors? Are there direct or suggestive allusions? Do the offer historical content, or are they only rooted in the symbolic? Do they search for other cultural and linguistic diversities in new and foreign countries? [...]
The personal history of Michèle Sarde is marked by the appearance of Judaism as insinuation, as omen [...] Born of Sephardic Jewish parents, hidden during the Nazi occupation of France and baptized Catholic, her Jewish heritage had been an enormous, life-saving secret: “Silence was forgetting, first and foremost a therapeutic forgetting, a bandage on a open wound.” In Returning from Silence, the book that illuminates her experience of coming out of the silence, and her essay herein, Sarde observes a Jewish woman author’s confrontation with a history first denied and then told. From the moment of the public revelation of her Jewishness, her work changed, dedicating itself to the search for the path of memory and the understanding of tomorrow.
Introduction by Marjorie Agosín, Jelena Filipović and Oana Hergenröther
1Marjorie Agosín, Home: An Imagined Landscape

Raised as a little French girl, I was baptized and attended Catholic catechism class like the others. When I was 11, my mother told me I couldn’t do my Holy Communion because we were Jewish, adding that the grandparents I longed to see again had been murdered for being Jews. I thought I would die. At first, I bitterly resented my mother for her blunt admission. However, she had saved me from deportation. I felt obscurely that she had chosen to die with me rather than abandon me to an uncertain survival. Thanks to her, I had come through early childhood almost intact. Accordingly, I agreed to live and stay silent, as bidden by her. Silence was forgetting, first and foremost a therapeutic forgetting, a bandage on an open wound. It also entailed forgetting one’s identity – in other words, forgetting one’s own self. How could I have felt this consciously, though? [...] Why do I write? I have tried here to give some meaning to what I have written ever since I began writing. But this account of myself is merely a variant of my biography and the sum total of my writing. There is no authorized version. Looking back at what I have written and how I wrote, I find that I write to pass through to the other side of the mirror and bring back to this world the Lost who have marked my life and left traces of themselves in my books. But my writing also escapes me. It is indeed in the chance conversion of its initial paradigms that the mystery of a book and its universal resonance ultimately crystallize.