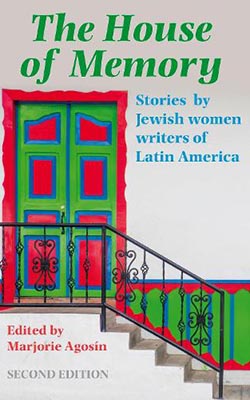 This new edition of The House of Memory: Stories by Jewish Women Writers of Latin America revisits the meaning of heritage and home, exploring the experience of losing the familiar to embrace the unknown. While often painful in its examination of antisemitism, this collection of essays embraces the belief that hope and love can triumph over adversity and racism. This collection contains over thirty stories from i nternationally acclaimed writers, such as Clarice Lispector and Margo Glantz, as well as new voices, with some appearing for the first time in English translations. Although many of the stories are rooted in the Jewish experience and tradition, there is a universal resonance that transcends place, race, gender and religion to speak of matters that are still ever-present to all of us.
Back cover of the second edition

From “In Search Of Marie J.” [À la recherche de Marie J.] By Michèle Sarde
Translated from the French by Rupert Swyer

Michèle Sarde is a French writer and retired professor from Georgetown University. She comes from a Sephardic family and resides in Santiago, Chile, and Paris, France. Like so many writers in this collection, the Holocaust is an essential element in her writing. Sarde addresses the Holocaust, its aftermath, and the way in which it affected the lives of individuals. She explores the historical fate of Jewish communities in Europe, focusing especially on the Sephardim who settled in the Balkans. The two chapters included here from the novel “In Search of Marie J.” described the intertwined stories of two women, one of them the author’s grandmother who perished in Auschwitz after being deported from Italy, and the other, Yvette Kalev, a survivor of the war. In the novel, the author-narrator attempts to reconstruct her grandmother’s past and her odyssey from Rumania to Italy (from where she was sent to Auschwitz by the Nazis). “In Search of Marie J.” is a metaphor for the journey that a post-Holocaust generation endures through faith and memory as well as ambiguous encounters with history.

Parallel fates: Crossing Nazi Germany
It’s a film in black and white, where we see two Jewish women in trains passing each other, crossing a Germany already turned Nazi. One is Yvette Kalev, a twenty-year-old off to study literature in Strasbourg before it’s too late.
Says Jenny: When she was in Paris, your grandmother never took the metro unescorted, then she crossed Europe all alone in 1938 to see her sister in Bucharest. She sensed perhaps that this might be the last time.

Sunday 11 September [2011] She arrived around midday in the wisteria- and rose-filled garden of the hotel in the historic quarter, a tiny lady with piercing black eyes beneath a hood of white hair. Although she was ninety-two, she had picked her way through cobbled streets of the old town, wearing an elegant embroidered silk jacket. The Lady from Plovdiv kissed me and drew a gift for me from her bag. An orange and yellow rose, which she herself had crocheted for me. I was very moved. She too.